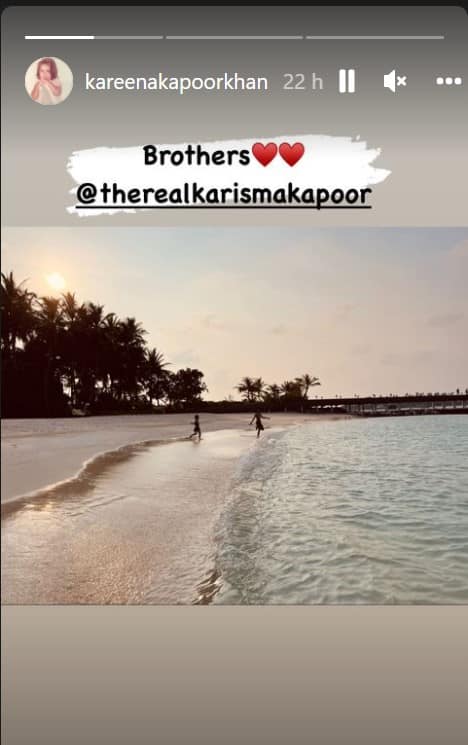 Kareena Kapoor is currently holidaying in the tropical islands of Maldives with her sister Karisma Kapoor, husband Saif Ali Khan and kids Taimur and Jeh Ali Khan. The actress flew to Maldives earlier this week and seems to be enjoying the summer season at the beach.

On Wednesday, she shared a few pictures from the trip on her Instagram, giving fans a glimpse of her beautiful journey. In one of the pictures, Taimur and Jeh were seen strolling on the beach together and Kareena captioned the photo as, “Brothers”.

In another picture, Kareena was seen wearing a black monokini swimsuit on the sidelines with her younger son Jehangir Ali Khan.

For those unaware, Kareena Kapoor is set to make her Netflix debut with an untitled murder mystery series based on Japanese author Keigo Higashino’s novel ‘The Devotion of Suspect X’.

Streaming platform Netflix announced the film through videos of Kareena, Jaideep and Vijay during a script reading session for the film led by the director.

Kareena will also be seen in ‘Laal Singh Chaddha’ opposite Aamir Khan, which will release in cinemas across the world on the auspicious occasion of Baisakhi on April 14, 2022 and is one of the most awaited films.

Previous Post
Hardik Pandya bowls at NCA, passes Yo-Yo test; Approval to participate in IPL 2022
Next Post
We are ready to accept whatever comes with Rishabh Pant: Rohit Sharma