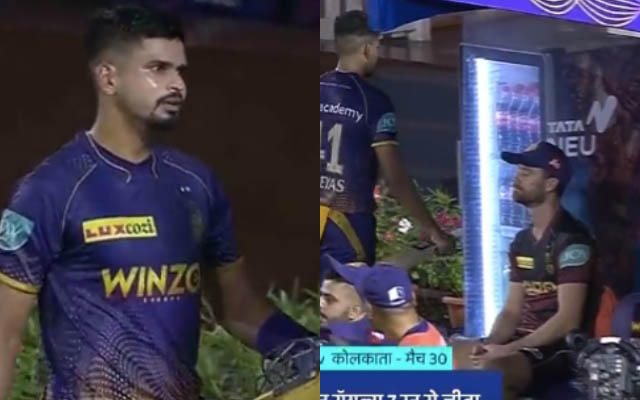 427 runs in 39.4 overs and a winning margin of 15 wickets and 7 runs. Yes, these were the figures of the ongoing match 30 Indian Premier League (IPL) Weather on Monday (April 18). Rajasthan Royals (RR) and Kolkata Knight Riders (KKR) played a thrilling match at the Brabourne Stadium in Mumbai. Courtesy of a sensational hat-trick from Yuzvendra Chahal in the 17th over, the Royals eventually won or perhaps made a surprise comeback, winning the game by seven runs.

Clearly, after batting so well chasing a target of 218, KKR thwarted it spectacularly, especially after shooting themselves in the foot in the 17th over of the innings. Skipper Shreyas Iyer’s scintillating 85 off 51 balls also went in vain and it is expected that he was not happy after the loss.

He was seen complaining to head coach Brendon McCullum sitting in the dugout. Shreyas Iyer had his bat and helmet in his hands and was talking to McCullum about some action on the field. Certainly, the KKR coach also had nothing to say at the time, considering that after losing such a close game, emotions take over.

As far as the match is concerned, Royals were propelled by Jos Buttler’s scintillating century, his second of the season. He scored 103 runs in 61 balls with the help of nine fours and five sixes. Sanju Samson’s 38 off 19 and Shimron Hetmyer’s 26 off 13 also helped RR as they posted a total of 217 runs in their 20 overs for the loss of five wickets.

In reply, Aaron Finch scored a scintillating half-century while Shreyas Iyer also chased down his side. He was well in control to chase down the need of 40 runs with six wickets in the last four overs. but Yuzvendra Chahali There were other considerations that took a scintillating hat-trick to leave the opposition stunned, and despite Umesh Yadav hitting a few strikes off the ground, KKR missed the chase by seven runs.